If you have just come back from your day trip to Angkor Wat, then you are probably looking for a nice place to sit down and enjoy a cool Angkor Beer – and even better if that place has some young and sexy Khmer ladies working, who will sit with you and sweeten your time.

Unfortunately, the girly bar scene in Siem Reap is in no way comparable to the one in Phnom Penh: In the capital there are several streets packed with dozens of “hostess bars” and hundreds of girls, but here in Siem Reap you won’t find a big red light scene.

In fact, there are currently only 3 girly bars in Siem Reap. Well, actually just two-and-a-half, as the third place is rather a normal bar that attracts a few freelancers on most nights. In this guide I will give you the complete overview of these three bars, as well as a map with their locations on it, my own pictures, a video and informations on prices – not only for the drinks, but also for the girls (= how much they ask for sex).

The 3 Girly Bars in Siem Reap 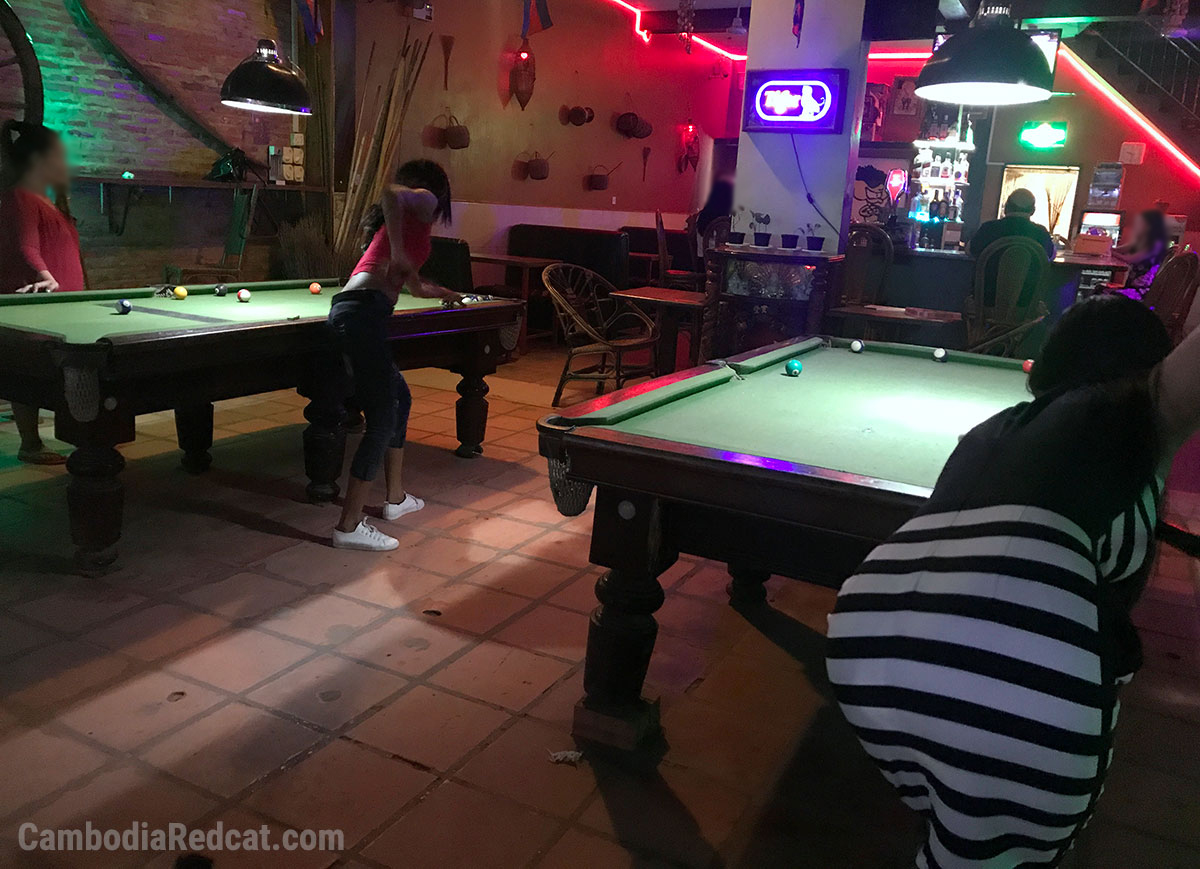 The most popular girly bar in Siem Reap. Mickey’s Night Bar has been around for more than 10 years now, and I hope they’ll continue opening their doors for lonely foreigners for many more years to come (even though I’m a little bit worried about their future because they still haven’t updated their pool tables which are in terrible condition).

You can go there on any night of the week and find between 10-15 nice Khmer ladies. They are not employed by the bar, and if you buy them a drink, they will sit with you, have a chat and of course it won’t be hard to get close to them, so you may take them to your hotel for short time (or long time, depending on which arrangement you make).

The overall atmosphere in Mickey’s is awesome, in fact much more relaxed and less business-oriented than in many of the hostess bars in Phnom Penh. It’s even fun to just sit at the bar, enjoy a cool Anchor draft beer and watch the scene and girls (or live sport on the TV). 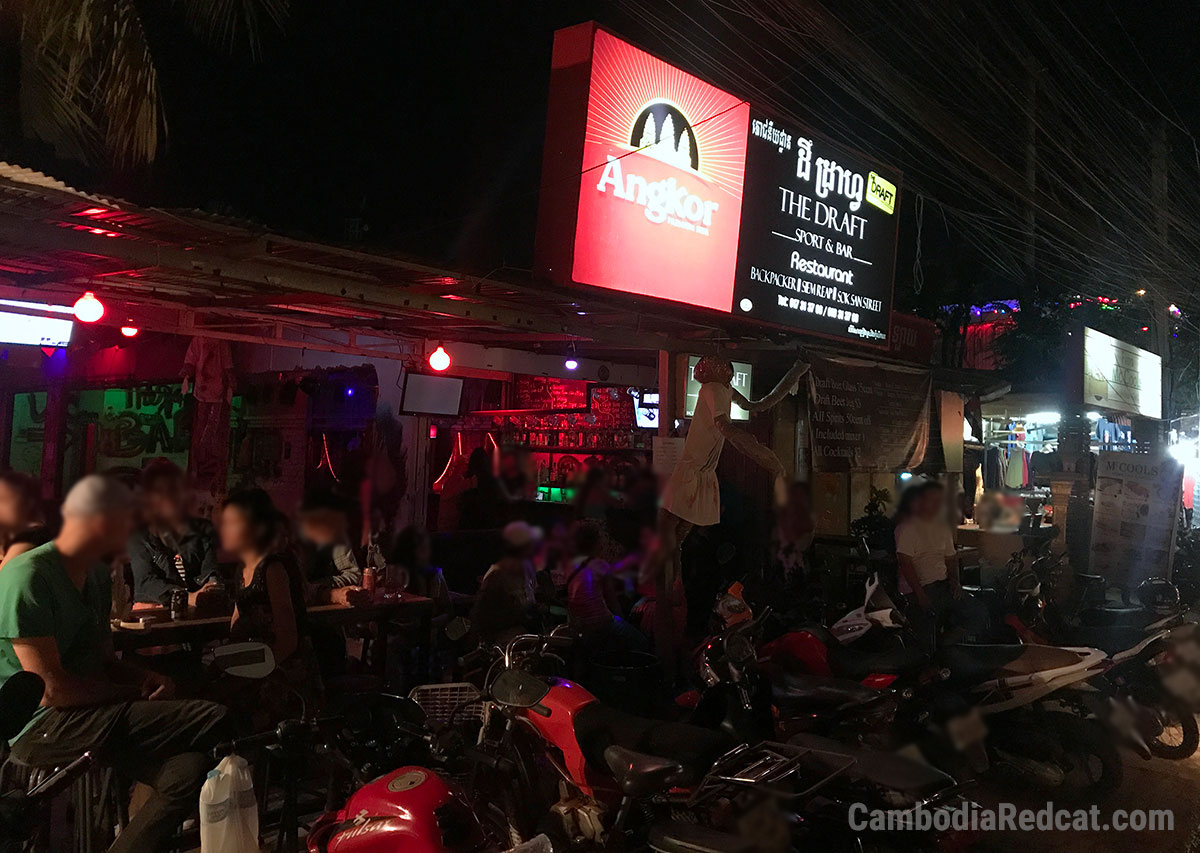 Everyone seems to know about Mickey’s Bar (see above), but only few foreigners have heard about The Draft Bar. Probably because the location isn’t as central as its competitor, so you wouldn’t usually just discover it by randomly walking around (check out the location on the map below).

This is the second best girly bar in town, there are about half a dozen girls working, and also a few ladyboys.

Just like Mickey’s, they have two pool tables which are free to use. Overall, it’s a decent bar but nothing that really blows your mind in terms of quality of the girls. But since you have such limited options in Siem Reap I would say just check it out.

X Bar is not a girly bar per definition, but rather a very popular bar on the 3rd floor of a building right opposite Pub Street.

The Khmer girls you see in this bar are not employed there – some of them are just regular girls (careful, many also coming with their Khmer boyfriends), while others are freelancers looking to meet a nice Barang (white man). The good thing about that is that you won’t have to pay for pricey lady drinks or the bar fine, but on the other hand it’s quite an unpredictable way to go about meeting girls, because it’s well possible that on some nights you won’t see any of these freelancers, but just western tourists and a few Khmer guys.

But I would still recommend you to visit X Bar at least once during your stay – it’s actually my favorite bar in Siem Reap, they have a decent pool table, great live music (usually westerners), and a fantastic rooftop (picture) with great views of pub street and around.

All 3 bars are conveniently located near Pub Street (black pin), and within short walking distance to each other.

Just like in most other bars in town, you’ll get a draft beer (mug) for 1-1.50 USD. Spirits are a bit pricier but still reasonable at 3-4 USD. Sadly, most of the girls will quote you 50 USD for going with you, but don’t worry, if you get on well enough you shouldn’t really pay more than 20-30 USD.

Here is the drink menu of Mickey’s Bar: 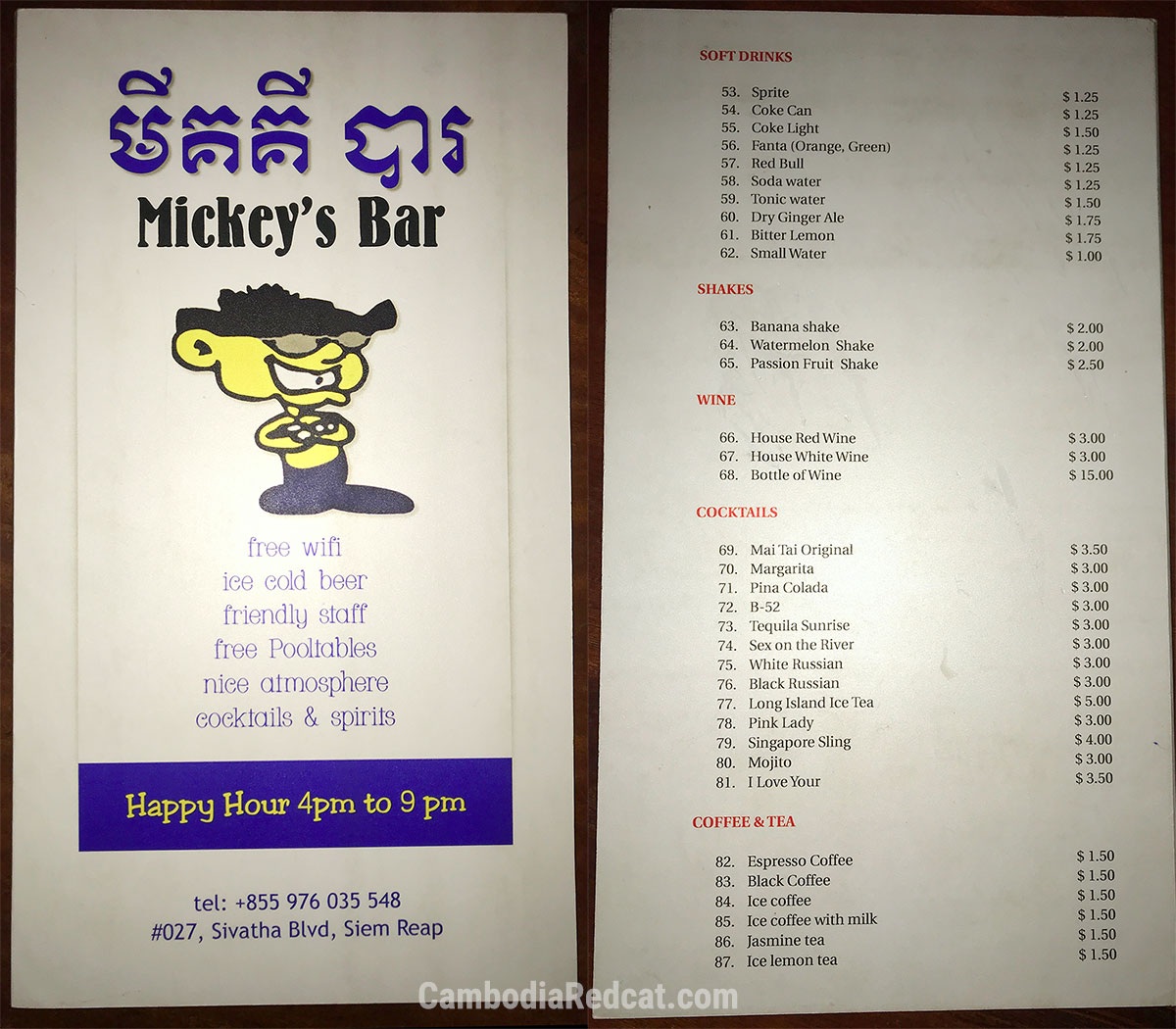 Other type of Girly Bars in Siem Reap:
The Bars on Khmer Pub Street 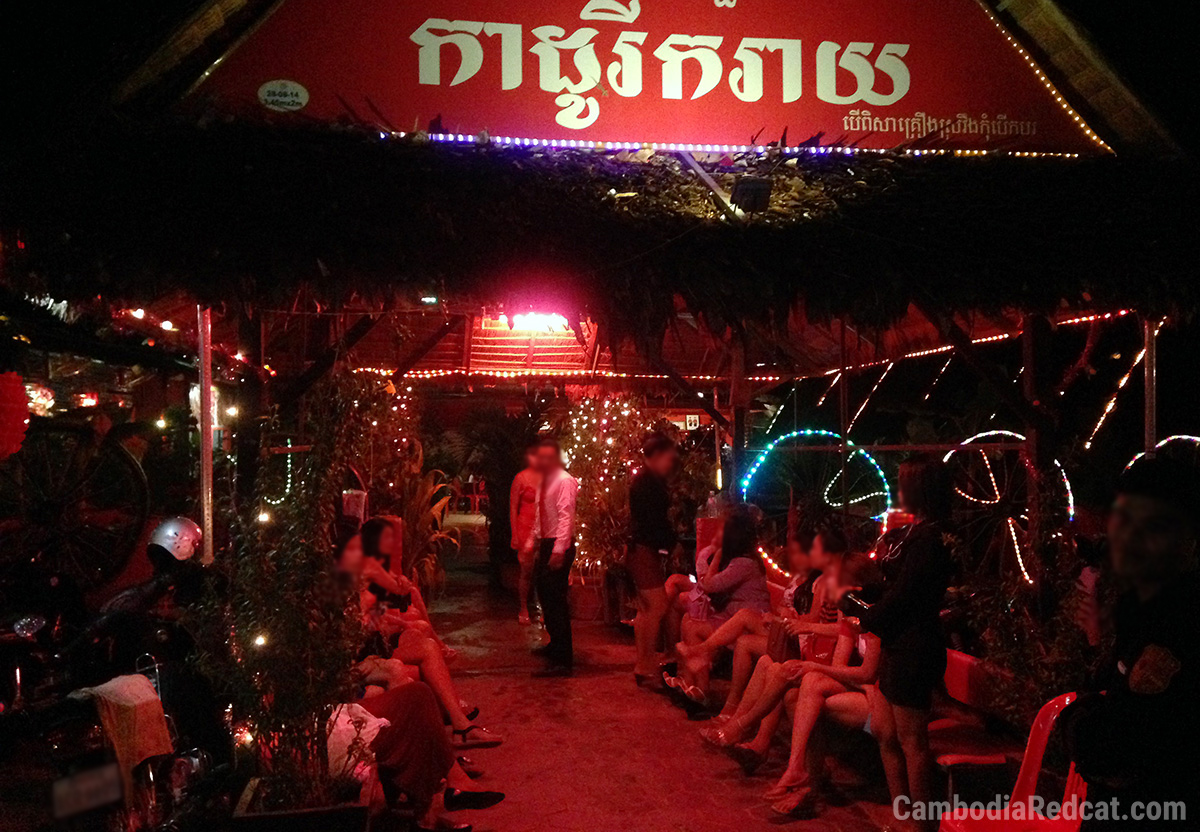 Yes, you read it right: There isn’t only the “Pub Street” for the tourists in Siem Reap, but also the so called “Khmer Pub Street” (that’s the official street name) in the northern part of town.

On that street (and its side streets) you can find 20-30 different bars. Like you can see in my picture above, the girls are sitting in line outside to attract the customers. You can choose one of them to sit and drink with you inside (and probably more later on).

Just be warned that these women barely speak any English, so you won’t be able to have a decent conversation with them (unless you speak Khmer of course). These bars mainly cater to Khmer men anyway, but still, they are all really friendly, including the managers.